CAIRO — The troop of bearded Islamists carried wooden clubs and wore motorcycle helmets. They marched in time beneath a sweltering noonday sun, rehearsing for the clashes they expected any minute with the Egyptian army. A military ultimatum was set to expire that evening, and the president was about to be deposed.

When they finished their drill, however, they didn’t want to talk about street fighting. Instead, they started a heated debate over a point of political theory—specifically, whether it is acceptable to question the legitimacy of a popularly elected leader.

“If they threaten President Morsi’s legitimacy, everyone will pay for it. There will be an Islamic revolution,” said a 49-year-old construction worker named Taha Sayed Ali, a lifelong member of Gamaa Islamiya, the group that waged an armed insurgency in Egypt in the 1990s.

What grants legitimacy to a leader? The question usually arises in the abstract realm of political theory, but in today’s Egypt, it has become one of visceral, daily importance. How big does a crowd of protesters have to be to indicate an elected leader is no longer the voice of his people? When do self-interested or authoritarian policy decisions go so far as to invalidate the mandate of an elected government? On the streets of Cairo, these questions have come to occupy the center of a serious, messy conversation about how to build a healthy and accountable new state. 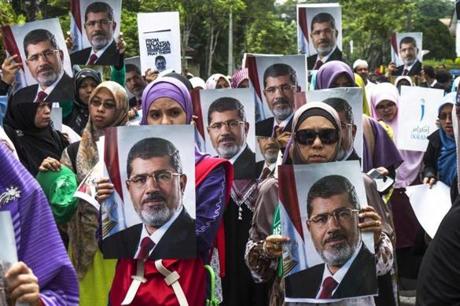 A pro-Morsi demonstration near the Egyptian embassy in Kuala Lumpur, Malaysia on July 8.

Many supporters of the Muslim Brotherhood’s Mohammed Morsi, who was ousted just after the demonstration, argue that an election confers a legitimacy that only another fair election can take away. They are challenged by a coalition of secular liberals and nationalists, who suggest that even a fairly elected ruler can lose his legitimacy if he fails to deliver on his responsibilities to his citizens. The result, in Egypt, has been a popularly elected leader ousted by what many are calling a “legitimate coup”—an idea that would be almost unimaginable in the longstanding democracies of the West.

“People must believe that we are legitimate, that we represent the majority, or else there is no hope,” said Basem Kamel, a liberal politician who supported the unseating of Morsi and who is determined that the military’s intervention not be seen as a coup. “The only guarantee is the people.”

The Egyptian people are aware that if they’re going to establish a government they all can believe in, they’ll need to settle on a shared understanding of what gives a leader authority and how to determine when a government has lost it. They aren’t there yet. In his final speech before being deposed, ex-president Morsi used the Arabic word for legitimacy—shar’iya—56 times, as though it might serve as a protective cloak against mounting public unrest. With Morsi out and the clashes that followed injuring hundreds and killing dozens, it’s clear that his mere insistence was not enough.

As the debate over legitimacy plays out in Morsi’s wake, the questions at stake resonate far beyond Egypt. The same issues apply in other Arab states in transition, as well as in other countries that have some trappings of democratic rule but are plagued by weak checks and balances and corrupt, authoritarian rulers. As Egypt sorts it out, the country is blazing a path forward that Egyptians, political theorists, and others in the Arab world are watching anxiously.

FOR MUCH OF world history, “legitimacy” wasn’t a question at all—kings ruled by force and claimed legitimacy from a divine order. The modern belief that “legitimacy” can be defined by the people themselves—even that it derives from their consent—dates back at least to the influential writings of John Locke in the 17th century. Political philosophers have debated how legitimacy is created ever since, but a common idea runs through all the different views: To establish its legitimacy, a government must fulfill its core obligations to protect its people and help them thrive.

Today the broad consensus in the West is that legitimacy arises from the voting booth. Citizens should be able to have profound, even violent, disagreements about the direction of their nation without questioning the basic legitimacy of the government; if they want to depose the party in power, they can do so in the next election.

The revolutionary forces that overthrew Egyptian dictator Hosni Mubarak in 2011 tried to establish a new system that might enjoy this kind of popular legitimacy. There would be elections and a process to write a constitution. The president, duly elected, was the Muslim Brotherhood’s Mohammed Morsi. Voters also chose an overwhelming Islamist majority for Parliament.

In the presidential runoff, Morsi explicitly appealed to voters who hadn’t chosen an Islamist in the first round but were convinced by his promise that he would govern with everyone’s interests in mind. At the time, even critics of the Brotherhood and the revolution conceded that the ballot was fair and the new president legitimate. 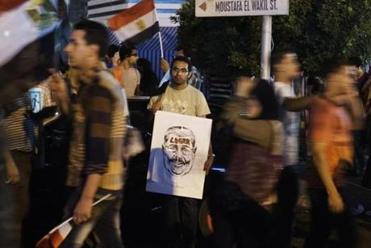 A protest at the Egyptian Presidential Palace calling for Morsi’s ouster on July 1.

That, however, is where agreement ended. The president proceeded to push through laws—and, ultimately, a new national constitution—without buy-in or input from the opposition. Morsi ditched all his non-Islamist allies. The ruling Muslim Brotherhood and its even more conservative Salafi allies believed they had public support to enact their platform, which among other things called for a doctrinaire application of Islam to the law. In effect, they claimed both God and the electorate on their side. At one point, after the Parliament had already been disbanded, Morsi tried to put himself above judicial review, which would have left his authority with no check at all.

To the politically broad spectrum of Egyptians who had helped overthrow the previous absolute leader, the president had overstepped. On the one-year anniversary of Morsi’s inauguration, at the behest of the Tamarod, or Rebel, campaign, millions took to the streets. In advance, the Tamarod organizers claimed to have gathered 22 million signatures of citizens demanding Morsi’s ouster—significantly more than the 13.2 million who voted for him. By failing to rule either effectively or inclusively, the organizers of the Tamarod petition said, Morsi had lost “ethical, legal, and popular legitimacy.” Their petition cited his administration’s practical failures and the fact that it had rammed through a new constitution with no regard for the objections of sizable chunks of his own citizenry, including secularists, Christians, and women. They even coined a new term to describe the authoritarianism of a fairly elected leader: “ballotocracy.”

By this definition of legitimacy, the ballot box isn’t the last word. In essence, the Egyptian protesters were turning to a tradition that sees the roots of legitimacy in justice and in tangible results. The American Civil Rights movement made similar arguments: It didn’t matter if Jim Crow followed the letter of the law in Mississippi, or had the support of a majority; in failing so many of its citizens, it forfeited legitimacy. This broader notion of legitimacy underlay the original rebellion against Hosni Mubarak’s dictatorship, and prompted the June 30 uprising and the coup that followed. By this way of thinking, how a leader rules may matter more than how that leader came to power.

IT MIGHT SEEM strange to have to choose between majority rule or inclusive governance as sources for legitimacy; one tends to think legitimacy requires both. But in the kind of government Egypt is trying to establish, which will have to satisfy a significant Islamist constituency, that balance is not so easy. A state can’t be driven purely by majority interest and also protect the rights of its minority groups. It cannot be both Islamic and secular. And, yet somehow, the various factions must agree to respect the governance of whoever ends up in power, or the messy business of writing laws and addressing the nation’s ills will never get underway.

Esam Haddad, one of Morsi’s closest advisers, wrote in a posting on his Facebook page that the coup interrupted a legitimate political process. “In a democracy, there are simple consequences for the situation we see in Egypt: the President loses the next election or his party gets penalized in the upcoming parliamentary elections,” Haddad said. “Anything else is mob rule.”

Others think that in Egypt right now, proper electoral process isn’t enough. Critics of Brotherhood rule, like Brookings Institution fellow H.A. Hellyer (who coined the term “popularly legitimate coup”), argue that any ruler of Egypt today needs to at least address, if not solve, the country’s vast economic crisis while also appearing sensitive to popular opinion. Morsi, Hellyer says, had legal legitimacy but lost all popular legitimacy. “With theoretical legal legitimacy alone, no executive can function,” Hellyer said. Now, the transitional president appointed by the military faces the same challenge.

With enough will to cooperate, some of the problems of the Egyptian state may be reconciled. The experience of the West suggests that, given enough checks and balances, majority rule through popular elections is compatible with minority rights. Other directions for the state may be mutually exclusive, like theocratic concepts of justice and secular law.

How Egypt attempts to resolve these tensions could prove pathbreaking. In modern times, there have been cases like Iran, where an Islamist majority simply overwhelmed the country’s secular faction; or like India and Indonesia, where pluralism and minority rights were instituted initially by fiat, and haven’t always survived intact when put to electoral test.

In the coming months, whether Egypt manages to confer a lasting legitimacy on any particular governmental arrangement will go a long way to foretelling where the country is headed. Arguments over legitimacy quickly veer into dangerous territory; once the discussion is about who is morally right, rather than a simple power struggle or policy disagreement, it becomes hard to give the other side any credit whatsoever. Ultimately Egypt will settle on some governmental solution and see its constitution harden into established practice. But so long as the sole arbiter is not law but legitimacy, the people will remain on high alert, ready to spill back out into the street.

The government installed by the coup doesn’t include any Islamist members, repeating the exclusionary practice of the Muslim Brothers it replaced—a move that is sure to leave all this government’s decisions subject to a legitimacy challenge by Islamists. This toxic cycle will continue until legitimacy becomes not a rhetorical feint but a reality. It’s the first and most vital step toward a viable rule of law.

Thanassis Cambanis, a fellow at The Century Foundation, is the author of “A Privilege to Die: Inside Hezbollah’s Legions and Their Endless War Against Israel.” He is an Ideas columnist and blogs at thanassiscambanis.com.